My poor little cat was getting skinny, but it seemed like she was still eating. This past week, I noticed that she was avoiding kibbles but could eat soft food. I called the vet who makes house calls and wrangled her into the carrier.

It was like a prison riot in my living room while we waited.

Tranquilizers. Oral surgery on the coffee table. Shots of painkillers and antibiotics. And then my poor drunk monkey was finally coming out of it (no video to protect her dignity).

Around 5am the next morning, she loudly declares her desire to go outside. In. The. Rain.

I regret my decision to let her out a few hours later when I can’t find her anywhere. I do a few laps around the neighborhood. Where are her new hiding places? She usually doesn’t leave the yard.

Finally, she comes home. She’s anxious, noisy, pacing, shivering. She won’t stay on my lap. She won’t curl up anywhere. She won’t be swaddled. Arrgh!

It’s a long night, but we make it.

Today, she is closer to her normal self. Playing, less vocalizing, wandering in and out. It’s sunny, so I left the door open.

Catsky-Doodle is under Kit Kat Monster. I was airing out the Cat Condos since there was a bit of sun today.

Later, they rearranged themselves. I put the lid back on and since I last checked on them, they are both still in there. I mean, it’s not like they have a whole apartment at their disposal. 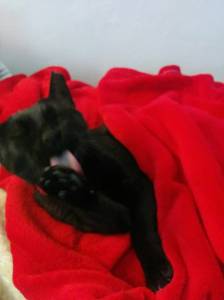 Psycho Kitty is inside, swaddled, living her best life with her human. The white cats could take a page from her book.

Update: Catsky-Doodle is in the house, but it may be another long night of prison riots.