I love close-up magic. I’m one of those people who never wants to know how it’s done; I just enjoy the ride. In fiction it’s called “willing suspension of disbelief.” I know it’s not real, but there’s a little part of me that wants to think that maybe there is a little magic in this crazy world of ours.

This kind of misdirection and optical illusion is done to entertain and amaze viewers. We are all happily fooled together. And it’s fun!

You know when “magic” isn’t fun? When it has political, economic, or social consequences.

This week I finished listening to 33 Strategies of War. The last section is about “Unconventional (Dirty) War” and the last chapter is called “Sow Uncertainty and Panic through Acts of Terror: The Chain Reaction Strategy.” Now I’m sure you’re all thinking, “Well, of course that would catch her attention. She lives in Israel and deals with this all the time.”

And this would be where I invite you to join me on the Conspiracy Train.

What if the chapter was called “Sow Uncertainty and Panic”? And what if the “enemy” isn’t a band of terrorists? What if uncertainty and panic in the general public serves a different purpose?

Trying to follow the media on these topics is like running after a hyperactive raccoon jumping into a garbage dump in search of shiny things that are apparently everywhere. The 24-hour news cycle leaves one shiny story after another in the dirt and no one seems to be putting the pieces together.

Sometimes you think the “trick” is finally being revealed. Or is it just another veil  of misdirection?

So how do you fight against uncertainty and panic?
Calm, rational thought. Unity and resolve. Do not bow to fear. 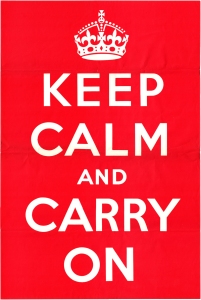 We normally expect this kind of inspiration from our leaders, but I’m not sure we can count on the illusionists in office.

As much as I love a magic show, I hope the house lights come up soon. This has gone on too long and I’m exhausted.

One thought on “Dark Magic – All Aboard the Conspiracy Train”