The days are all running together, but apparently we had Passover this week, and the Israeli government took the opportunity to temporarily but fully lock down the nation. I know that this is economically, psychologically, emotionally straining (I think the vernacular is “it’s a sh*tshow”), but for now I’m still okay with these extreme measures. The reason I’m okay is Sweden.

I’m trying to scroll less and take news breaks. I find the site that interests me most is featured on The Times of Israel related to the coronavirus.

This week, I saw a little clip about Sweden’s policy of not closing down the nation and allowing people to “use their common sense.” Culturally, Swedes are quite fine with working from home, they aren’t overly social, they don’t have multiple generations living together. It’s not exactly a “herd immunity” argument, but it does suggest that healthy, younger, less-vulnerable people can go about their business as usual while vulnerable people should be isolated.

Sweden is of interest to me because they have a similar population to Israel: Sweden, 10.1 million; Israel, 8.6 million.

**Note: I’m not a statistician or an epidemiologist, and I know the comparisons below are not scientific.**

Israel and Sweden have a similar number of confirmed coronavirus cases. I tend not to follow that number because it’s based on testing capacity. You can see on the site that Israel is testing twice as much as Sweden is.

I follow the number of deaths (no, not because I’m morbid). This number is also a bit flawed. What if someone died but didn’t get tested for coronavirus? If they died of regular flu or pneumonia or didn’t get treatment in the ICU because it was crowded, is it counted in the corona deaths? I don’t think so, but these are the numbers we have.

Now one might argue that Scandinavia in general has more deaths. Nope. Finland has 49. Norway has 117. Denmark has 260. Lock down nations all, and their populations range from 5.4 to 5.7 million.

The main “herd immunity” experiment was in the UK (67.8 million people). They have since walked it back and locked down (mostly). They even had their prime minister in the ICU this week. How are they doing? 9,875 total deaths with around 900 per day most of this week.

Sweden’s first death was March 11, and the “closed case” statistic is 30% recover, 70% die. I can’t even begin to speculate why there is such a huge difference.

Sweden’s death graph tends to be up and down (it’s reality, not a projection, after all). Most of this week saw 75-114 deaths per day, but only 17 so far today. It remains to be seen if in the long term Sweden’s strategy will work.

Israel was ranked number 1 in COVID-19 safety by Deep Knowledge Group. So even though we are going through something resembling a science fiction/dystopian future movie, I feel pretty good about how Israel is doing.

But I have some complaints.

Even so, there are still glimmers of light in the darkness.

One of my best scrolling experiences this week comes from the Facebook group View from my window. It’s exactly what it sounds like, and it’s beautiful, inspiring, and reminds us that we are all in this together.

Speaking of sh*tshows, this is the meme that made me laugh the hardest this week (from The Language Nerds on Facebook). 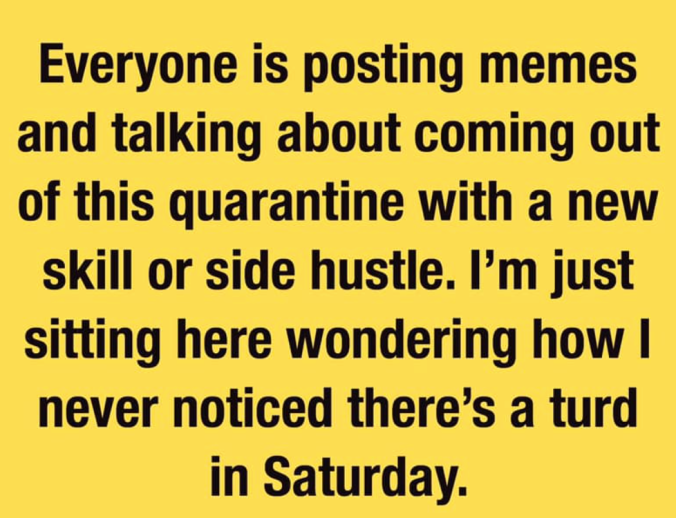