It’s today!  For lack of a better reference, Tu B’Av is Jewish Valentine’s Day.  The name is simply the date (tet vav = ט’ו = 15, pronounced too; Av is the Hebrew month).  It’s actually much older than Valentine’s Day and is shrouded in mystery, apparently.  In the olden days – the Second Temple Period – unmarried women in borrowed white dresses would go out to the fields and dance under the full moon of the 15th of Av.  Unmarried men would go out and choose a bride.  The borrowed white dresses ensured a level playing field for the women and men chose their brides based on personality rather than status.

Today, Israel has borrowed the romantic ideas of Valentine’s Day in the US, so chocolates are flying off the shelves and flowers are sold by the ton.  It’s considered a great day to get married, so venues are booked far in advance.

In a previous post, I wrote about Jerusalem’s Love Map .  Checking it again today, there are many more hearts and stories. 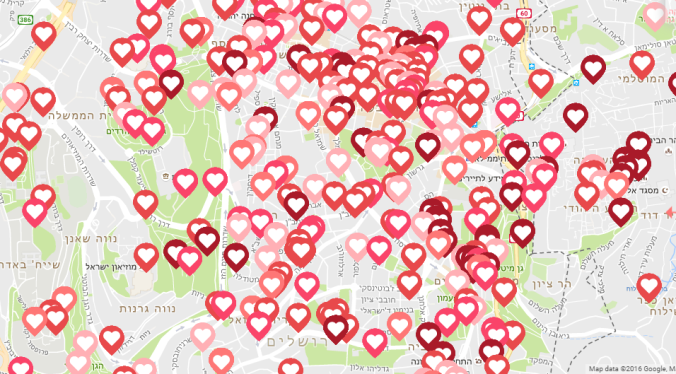 And since no one else in the world can see our special Google Doodle, here are some images (though they are actually tiny romantic animations).

I’m compelled to share one hilarious element of the Google Doodle.  They spelled the holiday wrong.  When you click on it to get more information, the first site is the Google Doodle site, everything else is related to the show Ab Fab or it has to do with abdominal exercises. So if you want to find out more about Jewish Valentine’s Day, don’t be Google and spell it To Be’Ab, spell it Tu B’Av and get the right search results.

And finally, I leave you with the song that inspired the title, from one of the best movies ever, Strictly Ballroom.  Remember, a life lived in fear is a life half-lived!

Life goes on.  And so it does in Israel.  We’ve had terrible events, we are having on-going debates about the future of our country, ISIS is standing at our gates, Iran, well, who knows what’s going on there.  And yet.

My first flatmate in Israel taught me one of the most important things I’ve learned about life in Israel.  Keep living.  In those days, buses and cafes were blowing up.  You learned that one or two sirens passing by was fine, but if you heard a third, there had been an attack.  He never let attacks on public places ever stop him from going anywhere.  My newly arrived self thought it would just be better to stay home and stay away from public places.  He wouldn’t let me and I am so grateful that he didn’t.

A few days after the Hillel Café bombing in Jerusalem, I was supposed to meet a friend for coffee.  He thought perhaps I would want to cancel.  “Are you kidding?  We are absolutely not cancelling.  We are going to Emek Refaim and we are going to have coffee in whatever café is open.”  He was surprised, but if I wasn’t afraid to go out, then he shouldn’t be either, right?

To this day, he still remembers that coffee in an empty café on a nearly empty street.  I think we even ordered dessert.

Israelis are resilient – not crazy.  There is usually a day or two of caution and then life returns to its usual rhythm.  People may be more alert, but they are not staying home cowering in fear.

This week in Jerusalem there was a Thai evening at the train station.  It was packed with people including many children.  The international arts and crafts fair started this week and I assume it was packed as usual.  Last night there was a night market on Jaffa Street.  I was too tired to go, but I still have a chance next week.  In short, this is life in Jerusalem in August. 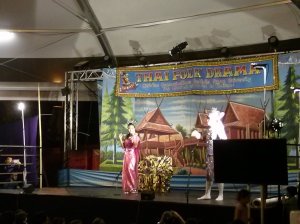 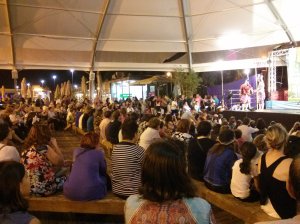 In preparing for this post, I took a look at headlines to find out what happened this week.  There was the usual: Iran, Temple Mount, UN, Russia, Greece.  But then I saw this little headline near the top of the page.  “Yerushalmi Café Culture.”  Turns out it’s about my local café!  Even with all the “big” news, there is a place for a write-up about a sweet little café.  The small things matter.  The small joys are what make life worth living.

So I’ll end here with two quotes that I think sum up this week’s email:

“A life lived in fear is a life half lived.” – from the film Strictly Ballroom

Been scarred and battered.
My hopes the wind done scattered.
Snow has friz me,
Sun has baked me,

Looks like between ’em they done
Tried to make me

Wishing you all a Shabbat shalom and in the spirit of the most famous Jewish toasts, L’chaim!  To life!