Monday was the final day of the holidays, Thursday it rained for the first time this autumn, and tomorrow we’ll change our clocks.  Autumn has arrived in Israel.  I do miss the changing colors of the season, but Israel has its own charms.  Fall and winter are greener and brighter (and wetter!) than summer.  Spring, as everywhere, is the season of awakening.

We’ve come to a new year with Rosh Hashana, we cleared our spiritual account with Yom Kippur, we reminded ourselves that everything is temporary during Sukkot, and as a final preparation for the upcoming year, we start reading the Torah again from the beginning. 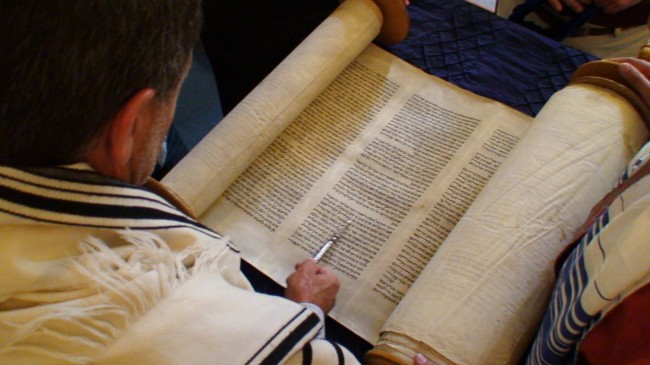 Every week a portion of the Torah is read along with a relevant passage from the Prophets.  The Torah refers only to the Five Books of Moses; the whole of the Bible is referred to as the Tanakh, an acronym of Torah, Nevi’im (Prophets), Ketuvim (Writings).  The Torah portion is read aloud in the synagogue and studied during the week.  This goes on for the whole year and at the end of Sukkot, they begin again.

A cynic’s view is that you have to have something to do every week.  But the more philosophical view is that every time you read the passages, you learn something new or have a new insight or see in a new way how it applies in your life.  The value is in the process of learning, not in the reading itself.

The Torah in the synagogue is a scroll.  It’s hand-written with a quill on parchment by a specially trained person who writes the Torah with full focus, intention, and concentration.  It really is a work of art.  However, unlike a book, you can’t just flip back to the beginning.  The most interesting and amazing Simhat Torah (the name of this holiday) I spent was at Hillel.  We unrolled the whole Torah and looked at the beauty of this work of art unrolled completely on several long tables.  We sang some joyous songs and then we rolled it back up.  The tradition is to read the last words of the Torah and then after it’s rolled back up, read the beginning lines.  It’s feels less like an end and a beginning, but rather like the completion of a circle.

In other events that happen over and over, UNESCO had another vote this week on the resolution on the Old City of Jerusalem and the “Al-Aqsa Mosque/Al-Haram Al-Sharif.”  This version still does not use the phrase “The Temple Mount” and removed the phrase saying that Jerusalem was important to the three monotheistic religions.

It passed, again.  I don’t think that reading and re-reading the text will give us any new understandings of the intent of the document.  However, keeping with the theme of circles, we can be sure that “what goes around comes around.”

One thought on “In the Beginning, Again”