Unfortunately, neither was perfectly executed.

Israel is the fourth country to land a craft on the moon (the seventh to orbit the moon). Just that is praiseworthy and we should be really proud! But “land” is sort of a stretch; it crashed to the surface.

The craft was called “Beresheet” – “In the beginning,” also the name of the first book of the Torah – so we can look forward to more attempts. The main picture making the rounds on social media was the arrivals board of Ben Gurion Airport listing the arrival time on the moon as if it was one of the many flights coming in.

The craft managed to provide a selfie just before crashing (a note about camera use and driving?). 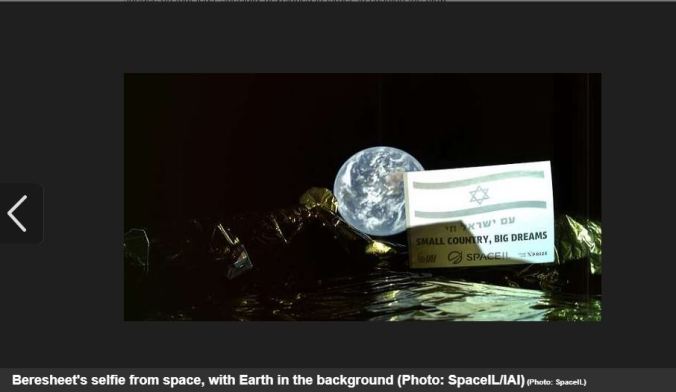 Along with the Israeli flag, the Hebrew says: “The People of Israel Live.” Beresheet came back on line after the crash to provide another selfie. ON. THE. MOON! 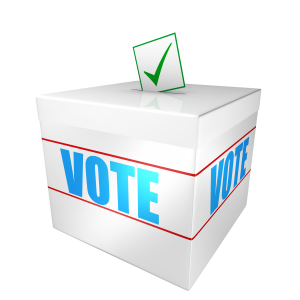 We also had an election. We can be proud that we’re still a democracy and we only have to deal with awful political campaigns for 3-4 months and we’re done. We need another month for the “winner” to form a coalition and then we get back to the business of running the country.

The “winner” is Benjamin Netanyahu (Likud) for his fifth term. I put winner in quotation marks because the next largest party “lost” by an extremely slim margin: Likud 26.45%, Blue and White 26.11%, with fewer votes cast than in the last election. But it was enough to push Likud to 36 seats in the 120-seat Knesset and Blue and White (a coalition party itself) to 35.  Netanyahu needs to put together a coalition of at least 61 Knesset votes and there are enough parties that lean to the right to do it. However, they include religious parties that will have their own demands. Some suggest that Likud and Blue and White (center-right) could come together to have no special interests in the coalition.

Here’s where I think Israel crashed. Netanyahu and his family are under investigation for corruption and he’s come out swinging against the media using Trumpian terminology (witch hunt, fake news, leftist conspiracy, etc.) I’m going to leave aside fake social media bots, vote challenges and recounts by hand, cameras in certain voting locations, and the fact that there were more parties in the race than I have ever seen before – 43 – so every vote for parties that didn’t pass the 3.25% threshold is a lost vote. Rather, I’d like to highlight a few “coincidences.” Perhaps it was a well-timed coincidence that the US recognized Israel’s sovereignty over the Golan Heights. Perhaps another well-timed coincidence was Russia brokering the return of a soldier’s body to his family. He had been missing for 37 years. Plus we had the anticipated moon landing (a couple of days after the election). The logic is that nobody but Netanyahu could pull all that off – certainly not the political newbies in the other parties – because he’s good friends with Trump and Putin. And look how “good they are for Israel.”

Are all these excellent gifts given for free? Is it because we’re just so awesome and have suffered for millennia? We probably won’t know the true costs for a long time.

As an optimist, I’d like to see the glass as half-full: Israel landed on the moon and has a more or less functional democracy. But there’s plenty of room for improvement.

One thought on “One step forward, one step back”