The new world we live in is weird. Starting with the weather. 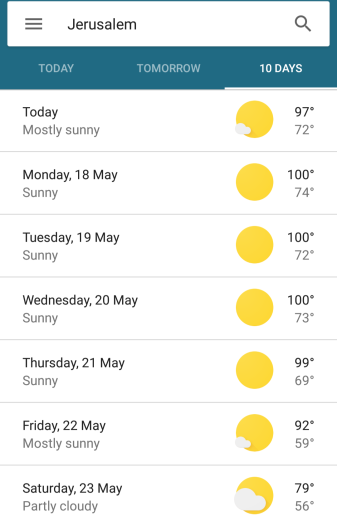 Traffic has been light in general, but it’s started to pick up as more places open. I rode a bus twice this week. I was on a double-length bus and there were only 6 passengers on it during “rush hour.” The next day I was on a regular bus during “rush hour” and was a little surprised to see 12 passengers. Passengers are not allowed to enter the bus through the front door or to sit in the seats near the driver.

Kids were back at school, but a  teacher tested positive for COVID-19, so they isolated the teachers and the kids and closed that school for two weeks.

An Israeli moment: A religious girl, probably about 10 years old and dressed in a school uniform of a long skirt and a long-sleeve button-down shirt, was in charge of getting her two younger sisters (twins, I think) to school by bus. The older one was wearing a mask and the younger ones, probably about 5 or 6, weren’t masked. It’s not uncommon for older siblings, even at this age, to be in charge of their younger siblings. But now it involves being responsible enough to properly wear a mask in public at such a young age.

I’d been hearing Shabbat services in the park for the past few Fridays. Now that synagogues are open again, I found that I missed hearing the singing yesterday.

Most mornings on my way to the office, I saw a group of men wearing prayer shawls walking home after holding morning services on a street corner. I’ve kind of missed seeing them lately as well.

People are out and about. They are lax about wearing masks over both their mouths and noses – the underside of people’s chins seem to be overly protected by masks though.

Friday was Jerusalem Day. Usually there’s a parade and a lot of celebrations. I heard nothing. I saw nothing. It was barely a blip this year for me.

Next week, restaurants will open for seated customers (take-away was always available), and we’ll have to see how things go. Will new cases spike or has the virus played itself out for now? Based on the virus genome structure, they found that 70% of Israel’s cases came from the US and the virus was spread by a small number people. Weirdly, that means it wasn’t from ordinary tourists, but people who come to Israel and have a lot of interaction with Israeli citizens. What does that mean for tourism (a huge industry for Jerusalem)? It’s anyone’s guess.

The strangeness of the new normal will eventually fade, and the new normal will just be normal. We’ll all wonder how we ever got along without a supply of surgical masks and disposable gloves at home. I mean, you’ve been using alcohol-based hand sanitizer for ages already, right?