I just liked this headline from The Guardian

When Kellyanne Conway used this phrase this week, my first thought was that if she had any sense she would have said that it was a “different interpretation of facts.”  And then it occurred to me, “Hey, we have plenty of ‘alternative facts’ reported about us in Israel.”

A few weeks ago 4 soldiers were run over by a truck driver on purpose in a targeted attack.  Here’s what the BBC first reported. 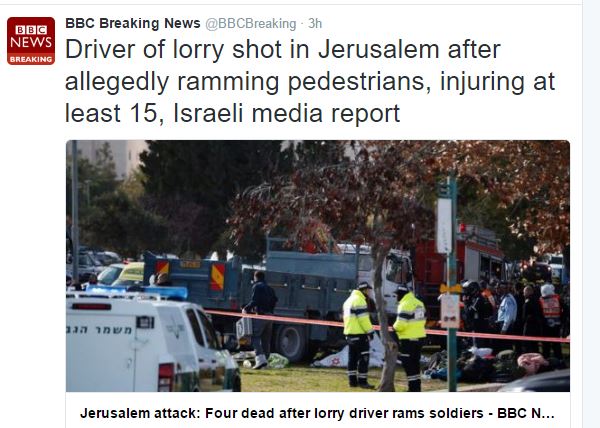 Screenshot from my computer

There is actually nothing untrue in this headline.  A truck driver was shot.  It happened in Jerusalem.  There were allegations that he hit people and injured them.  And the Israeli media reported it.

But do you see the problem here?  It’s the arrangement and presentation of the facts.

Does it feel different when you see the headline this way?  Here’s their later post.

Screenshot from my computer

Still true, but now you understand who the victims are and who the perpetrator is and that it was an attack – not an alleged attack according to others.

I’m an editor.  I work with words for a living and it matters how facts are framed.  For instance:

Terrorist shot in his truck after he killed four soldiers.

All of these sentences have the same facts, but you feel differently about each because of how those interpretations are framed.  And yet none of them is a lie.

The most shocking example of different interpretations of facts I’ve heard of was in 2007 when a master’s student won an award for a research thesis that looked into the question of why IDF soldiers don’t rape Palestinian women.  Her conclusion – hold on to your socks – it’s because IDF soldiers are racists and dehumanize Palestinian women so they wouldn’t even want to rape them.  Let me repeat.  She WON AN AWARD for this work and Hebrew University stood behind the decision.  (Here’s an analysis of the paper done by a professor at Haifa University. Here’s a shorter article about it.)

That’s an alternative fact if ever I’ve heard one.

I’m appealing to you, dear reader, to be aware.  Read multiple news sources.  Read news you don’t agree with (in moderation if you have high blood pressure).  Watch out for fake news.  Analyze and deconstruct what you read and hear.  More than anything else, hold people accountable for the words they use and how they use them.

More on history and truth from my blog:

The truth about history.

How history will remember.