Dad will be officially remembered by friends and family tomorrow – even though he’ll be remembered by all of us all the time (with blessings to go with the memories).  I wanted to write a bit more about the mourning process – and I will – but not today.

Today is my favorite day of the year in Jerusalem.  Today is the Jerusalem Marathon!  I love the fact that we close down the city to welcome people from around the world to run through the streets with smiles on their faces to celebrate life!  This year 25,000 people ran (2,500 of them from outside of Israel).  Not all ran the marathon; there were 22 km, 10 km, 5 km, and 1.7 km family fun run options.

This year Jerusalem – and all of Israel – has been facing a lot of terrorist violence in the streets, but that did not stop the marathon.  The police and army were out in full force and were a very obvious presence.  There is always significant security, but this year I noticed many, many more visibly armed soldiers, rifles at the ready.

I watched the marathon at Jaffa Gate – yes, that’s right, a number of stabbings took place there in recent weeks, but that wasn’t going to stop me.  There were fewer spectators than previous years, I’ll admit, but I did see many tourists passing by on their way to visit the Old City. 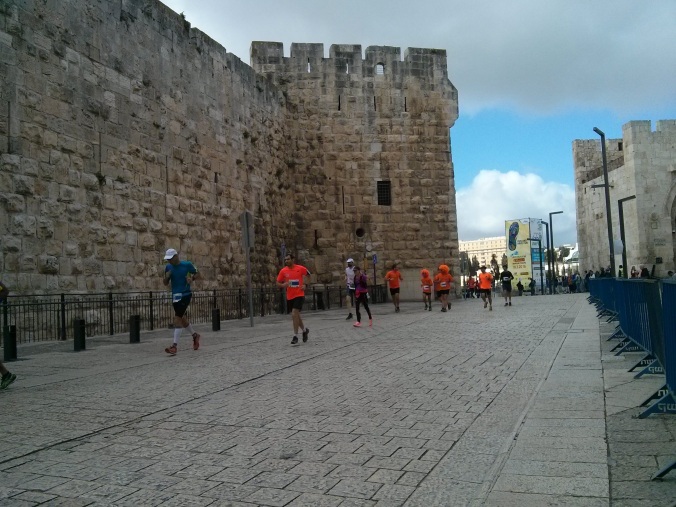 From inside Jaffa Gate

I saw a lot of beautiful things today – in no particular order: 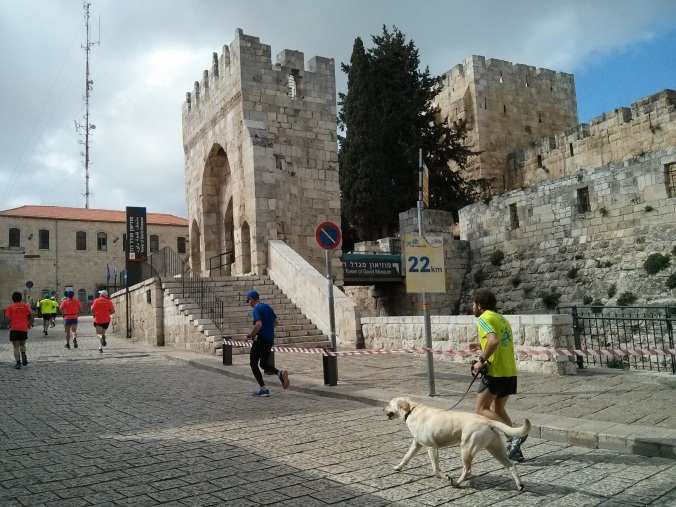 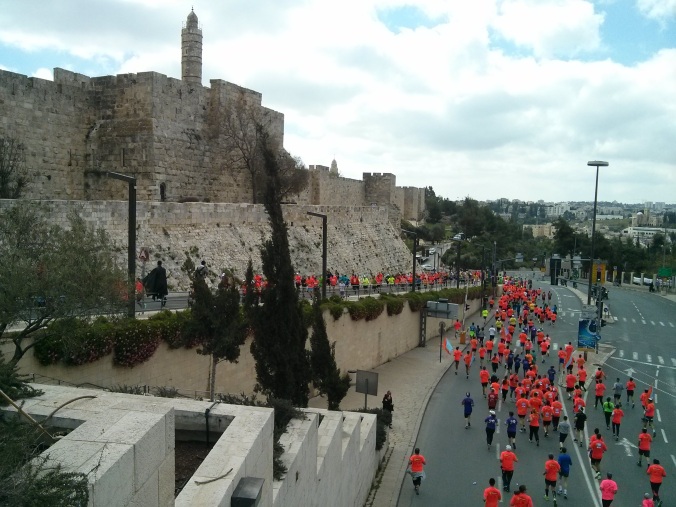 Approach to Jaffa Gate along the walls

(Link to my video – a few seconds of the marathon, for atmosphere [I hope it works. It’s my first uploaded video ever!])

Last year, I had a meaningful experience at the marathon.  I had some self-doubt about the direction I was going with my life and just crested the stairs as I arrived at Jaffa Gate, the music overwhelmed me with the lyric “Don’t you worry, don’t you worry, child. Heaven’s got a plan for you.”   Turns out there was a plan.

The DJ and the nearly empty plaza (people did pass through, but didn’t hang around here)

I wondered what the music would bring this year.  The DJ was the same after all.  I have to say, I feel bad for the poor guy.  He probably arrived before dawn to set up and then spent the entire morning playing music and calling out “AAAYYY, OOOHHH!!! AAAAY, OOOHHH!!!! BOKER TOV, YERUSHALAYIM!!!!  EIZEH YOFEEEEEEEE!!!!!  KOL HAKAVOD!!!!!”  I’m surprised he doesn’t get laryngitis.

I was waiting for a friend to pass by who was running the 10K.  The DJ played a remix of “Billy Jean” by Michael Jackson and I knew my friend, who is a fan of Michael’s music, would arrive within a few minutes.  And I was right!

The DJ played David Bowie’s “Let’s Dance” – “If you say run, I’ll run with you.”  Since David Bowie recently died of cancer, I felt like it was a moment for my dad – even though he was not a fan.  Another reminder of my dad was seeing the business owners around Jaffa Gate. They just did what they normally do:  drink coffee and smoke cigarettes.  Dad would have been very comfortable indeed with those guys.

I meandered around a bit longer and I thought to myself, “The music was better last year.” I hadn’t even finished the thought, and guess what?  Swedish House Mafia, “Don’t You Worry Child.” And it starts like this:

There was a time
I used to look into my father’s eyes
In a happy home
I was a king, I had a golden throne
Those days are gone
Now the memories on the wall
… And my father said, “Don’t you worry, don’t you worry, child…”

And I smiled (through a few tears, if I’m totally honest).

This week Israel ranked (again) as the 11th happiest country in the world. The study uses several guidelines and benchmarks to support the findings, but I think it only takes coming to Jerusalem on marathon day to see that this is true.  No matter what happens, we choose life.

In the end, this did turn out to be a bit about Dad, but I’d like to think it was more about the ability to celebrate life and be joyful in the moment.

As I was thinking about what to write this week, I was thinking a lot about David Bowie, and then I heard the news about Alan Rickman.  Both aged 69.  Both died of cancer.  Both chose to keep their illness secret.  The news of both their deaths shocked their fans to their cores.  Both did the work that they loved until their last minute on this Earth.

David Bowie’s music is part of the soundtrack of my youth.  Alan Rickman played roles that will forever be his, marking them with his unique style.  I admire both their bodies of work and I am saddened by the news.  The arts truly suffered a significant loss this week.

But this is where things get interesting. 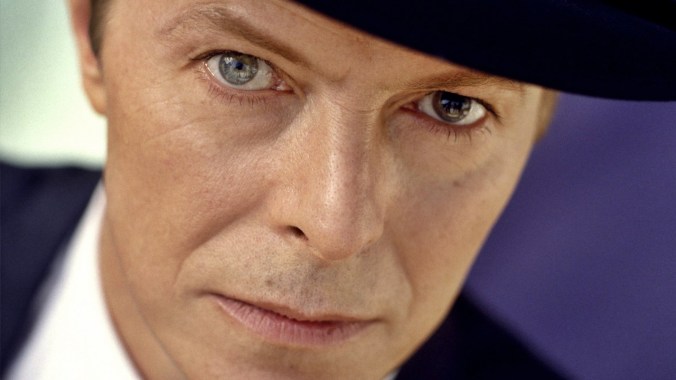 When the news of David Bowie’s passing was publicized my Facebook news feed had almost no other news.  Everyone I knew and everyone they knew seemed to post sad thoughts, memories, favorite songs, favorite movie scenes, how David Bowie influenced their lives, tributes, and anything else connected to David Bowie.

In Israel this week, the political left and right are pretty much at each other’s throats right now.  But all of their noise was drowned out by David Bowie.  People who normally don’t post on Facebook posted tributes.  People from every political viewpoint posted about David Bowie.  Video of David Bowie coming to Israel in 1996 found its way online within a few hours.  Stories of David Bowie’s connection to Kabbalah made their way online.

Over the next days, I saw even more stories connecting David Bowie to everything. Society. Change. Accepting oneself.  Reinventing oneself. Fashion. Music. Art. Film. And cancer, of course.  The most unusual link was Could Big Data have saved David Bowie?

Here is my Facebook post about David Bowie.  And that’s the point of this essay.  David Bowie transcended everything.  I even mentioned him in my recent Christmas post.  His rendition of Drummer Boy / Peace on Earth with Bing Crosby is really the story of his legacy.  The musician presented his passion and music as a gift and with that perhaps we might eventually have peace on Earth.

He played Nikola Tesla in The Prestige.  Other actors could have played Tesla, of course, but with his eyes of different colors; his forward thinking; his constant striving to reinvent himself, his music, his life; no one else should have played him except David Bowie.

In the Jewish tradition, when someone dies, we say “may his [or her] memory be a blessing.”  I think David Bowie’s memory will be a blessing for many, many people all around the world.  And at least for a few days, the world put aside their differences and united in remembering his music and art.  That sounds like a blessing to me.

There.  I said it.  I’m a Jew who lives in Israel and I like Christmas.

My enjoyment of Christmas follows the philosophy Dr. Seuss, one of the great philosophers of our time.  The Grinch cannot steal Christmas because it is not based on material goods.

My favorite movie for Christmas is It’s a Wonderful Life.  The message is simple: You matter.  The things that seem insignificant to you matter a great deal to someone else and could change their lives.  George Bailey is accidentally $8,000 in debt and everyone bands together to help him because without him they would not be who they are.  Not only do you matter, but we all matter to each other.

The Little Drummer Boy has nothing to give but his drumming ability.  And the gift he gives is his song and his passion.

In O. Henry’s The Gift of the Magi, the man gives up his prized watch to buy a comb for his wife’s beautiful hair and the woman gives up her beautiful hair to buy a watch chain for her husband.  It was not the gift that mattered, but the sacrifice that each was willing to make for the other.

I’ve heard that there is a “war on Christmas” in the US and I wholeheartedly agree.  But it is not the war on whether or not it is okay to greet people with a “Merry Christmas!”  The war on Christmas begins with consumerism and greed.  It continues with encouraging children to make demands of gifts without also teaching them gratitude.  It is probably not much of a coincidence that we go from the “give me candy” of Halloween to the “give me presents” of Christmas while forgetting about the “thank you” of Thanksgiving.  It breeds in the culture of the disposable that has forgotten the meaning of value.

I’m not a pre-rehabilitated Grinch or Scrooge.  I don’t think that Christmas should be all about ideals.  Have all the stuff!  Enjoy the glorious wrapping paper and the excitement of presents under the tree!  Bring out Santa’s Christmas magic for the kids and enjoy the egg nog!  But don’t forget that the real spirit of Christmas is you, the choices you make, the example you set.  Aren’t we all reminded at Christmastime “peace on earth, good will to all”?

A note about Christmas in Israel

We are not surrounded by Christmas carols in the malls.  Decorations featuring stockings, trees, or Santa are few and far between.  There are no piles of gorgeously wrapped presents next to elves and Santas awaiting children to tell them their Christmas wishes or have pictures taken with them.

But there is Christmas.  There is a significant community of Arab Christians and they do have the familiar decorations with the tree, lights, presents and family dinner.  But it’s more of a religious holiday.  Secular Christmas is not a thing in Israel.

Though here’s NORAD’s evidence that Santa did come to Jerusalem.

Today is a regular day in Israel.  I must admit that in the early years of living in Israel, it felt weird to be at work and write 25 December on a document.  That also means that if you wish to celebrate Christmas, you have to ask for the day off and use your vacation days for it.

A couple of evenings ago, I heard about a singing duo backed by a jazz trio who would be singing Christmas carols at a pub in town.  But they would be singing only carols that were written by Jews.  That is A LOT of songs, by the way, and most of them are the most famous and most beloved songs of Christmas: White Christmas, Winter Wonderland, Chestnuts Roasting on an Open Fire, Silver Bells, and plenty more.  (Others have written about why this is, so I won’t mention it here.)

But here’s the interesting part:  I went to the pub and I couldn’t get a seat.  It was totally packed with middle-aged, religious American Jews.  It may have been a coincidence, but the men could have passed for Santas with their beards and round bellies shaking like bowls full of jelly.  The women with their headcoverings might as well have been wearing kerchiefs.  There weren’t any reindeer available, so I just walked home.

Even though last night ‘twas the night before Christmas, Happy Christmas to all and to all a goodnight!