Mike Huckabee came to the Begin Center (where I work), visited the museum, and gave an interview to Channel 2.

The new US Ambassador coincidentally met Steven Tyler at the Western Wall. Actually, that was the week before.

We spent the week celebrating Jerusalem Day, which this year marked 50 years since the reunification of Jerusalem.  The parade went right by my house! 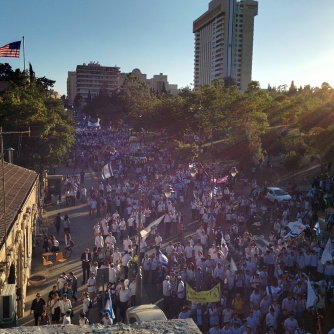 Oh, right!  The President of the United States visited Israel.

There’s plenty of analysis and deconstruction of his visit all over the internet, and I can’t really add anything very enlightening.  I can say that if my only view of him was how he presented himself to the Israeli media, I would say that he did pretty well.  He went to the Western Wall – the only sitting president to have done so – and that says a lot to us here in Israel.

Trump, I think, also gets points for taking such a difficult foreign trip.  Air Force One is the only plane that has gone from Saudi Arabia directly to Israel and our media took note of it.

Granted there were a few faux pas.  When Trump called terrorists “losers,” I thought back to my 11th grade English teacher who always reminded us to “elevate our vocabularies.”  I chuckled to myself when Trump mispronounced the name of the king of Saudi Arabia – he’s Salman, not Solomon.  I was more surprised that he mispronounced Elie Wiesel’s name.

While the US watched to make sure Trump didn’t misstep during such a potentially diplomatically dangerous trip, we here in Israel had our own problems.  We have a guy who is called “Israel’s Trump” and he wears the name with pride.  Somehow he ended up in the greeting line at the airport – it was a question as to how he got there since the government says he wasn’t invited and he says that he was.  And then he took a selfie with the president of the United States.  A SELFIE!  *FACE PALM*

It became an instant meme in Israel.

Paratroopers at the Western Wall in June 1967, which is a nice link to Jerusalem Day. Source.

Trump originally wanted to speak from Masada, but due to the heat and the fact that Marine One isn’t allowed to land in the middle of a UNESCO archaeological site – not to mention where would everyone sit? – he went Yad Vashem as most leaders do.  Strangely, his main speech was at the Israel Museum not the Knesset.  It turns out that Israel couldn’t guarantee respectful behavior of the members of Knesset, so they decided to have a select crowd at the Israel Museum instead.

The prime minister’s wife, Sarah Netanyahu, was quite chatty and seemed to be in everyone’s business, not to mention making her own little faux pas, but perhaps it was because Bibi Netanyahu wasn’t feeling very well.  A few days after the visit, Bibi went to the hospital for a little procedure to deal with some kidney stones.

With minefields of potential embarrassments and diplomatic danger zones at every turn on both sides, the trip to Israel went surprisingly well.  (I guess since then Trump’s trip has taken a turn for the worse, but that’s beyond the scope of this post.)

Final thought: As an outsider to politics, Trump isn’t doing things the way they’ve always been done.  He cares little for diplomatic protocol and seems to speak without a filter.  While I’m personally not a fan of Trump, I can see some benefit to flipping diplomacy on its head. It’s also pretty risky and has the potential to create diplomatic fiascoes.  But in Israel, this time, Trump’s variation from the norm seemed to work.