Friday the 13th is not a thing in Israel.  Halloween is also not a thing.  Stores aren’t covered in fake cobwebs.  There are no advertisements for scary costumes.  Aisles in the supermarket are not dedicated to snack-sized candy.

What is a thing here is a week full of events throughout the city and today being the very last day before the last Shabbat before we finally get back to our normal routines, the aharei ha’chagim time.

On Sunday, the streets were filled with Jews from all around Israel and the world making their way to the Western Wall for the Priestly Blessing.  That is still a thing in Israel.  Twice a year – on Sukkot and Passover – the entirety of the Jewish population is blessed by the descendents of the priestly class, the Cohenim, or anyone with the last name Cohen or derivatives thereof.

Fun Fact: Remember Spock’s hand gesture when greeting someone?  That was based on Leonard Nimoy’s memories of the Priestly Blessing as a kid.

By Kleuske (Own work) [CC BY-SA 3.0 (https://creativecommons.org/licenses/by-sa/3.0)%5D, via Wikimedia Commons

On Tuesday, the streets of Jerusalem were filled with Christians from all over the world showing their support for Israel with a parade.  It was reported that 60,000 people participated from 80 different countries. (Link has good pictures.)  And this year I didn’t even have to leave my house to see it because the parade route was on my street. 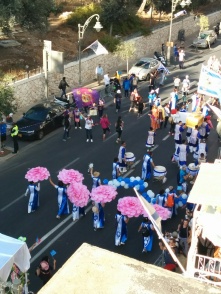 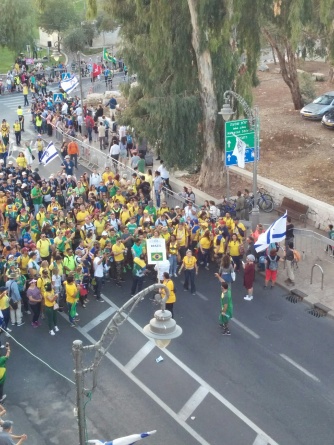