When people visit Israel they see 18-year-old soldiers carrying M-16s casually slung over their shoulders. They see guards at supermarkets – checking you when you go in, not when you go out. Metal detectors are everywhere. I work at a museum. There are both guards and a metal detector. You see armed guards on public transit. You also see private citizens with pistols tucked into their waistbands (most often covered with an untucked shirt).

You might think that Israel is a heavily armed society. And you would be totally wrong. 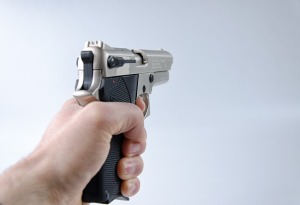 After the tragic school shooting in Florida this week, I had a few conversations about gun ownership. Israelis across the board cannot believe how easy it is to get a gun in the US. Here are a few things I found out:*

Israel has soldiers and guards to protect against terrorism, not crime. Israel has low rates of personal crime (as I’ve mentioned before) and in general Israelis feel safe. We depend on our army – filled with the sons and daughters of everyone we know – to protect us against threats to our national security.

Yesterday, Mike Huckabee, former governor of Arkansas, suggested that the US should follow Israel’s lead in preventing mass shootings. Putting in more guards might create more jobs, but I can confidently say that it is unlikely the US would impose any of the restrictions Israelis have on gun ownership.

Israel is a country of approximately 8.5 million people. It’s small, but we still have plenty of problems to deal with and debates every day on how best to handle any given situation. Personal gun ownership is not even on the radar.

*Please leave a comment if anything I’ve written here is inaccurate.