In spite of what you see on the news, I still feel quite safe in Jerusalem. However, I’m not crazy and I won’t be reporting live from the Temple Mount.

Unless you’ve been too wrapped up in the drama at the White House, you might have noticed that the Temple Mount has been in the news lately.  This post won’t be a point by point explanation of that, nor will I get into all the vitriol.  The salient facts are:

I’d like to jump out of the 24-hour news cycle and try to look at the big picture.  I’ve written about the UNESCO decisions before (here and here) and I continue to be troubled.

Jerusalem and its Walls are a UNESCO World Heritage Site in Danger.  In skimming the conservation report for 2017 prepared by Jordan and Palestine for UNESCO, Israel is accused of breaking the “status quo” all the time.  So two weeks ago, putting in security measures violated the status quo, which is a strict constructionist view of how to maintain the status quo.  The security measures weren’t there in 1967, thus they should not be there now.  Security is trumped by the politics of the status quo.

Screen capture from the conservation report

Here’s my final point about the status quo and why we have to be so much more diligent about paying attention to UNESCO.  Buried in a footnote on page 39 of the conservation report is this:

Under the terms of the Status Quo on holy sites, a decree fixed the Ottoman Sultan in 1757 and codified in more detail by a British government Commission in 1922, 1929 and 1933 the Wall is a Muslim Waqf property and the Waqf owns the Buraq Wall and the Buraq Plaza in front of the wall. In these decrees, Jews have the right to stand on the pavement in front of it and pray. (Emphasis added.)

This is what is considered the “status quo.”

So according to documents accepted by UNESCO – the United Nations Educational, Scientific, and Cultural Organization – Jerusalem is not in Israel, the Cave of the Patriarchs is an excellent example of first century CE architecture, and the Western Wall is the western wall of the compound of the Haram al Sharif. Oh, and Jews and Christians might have some connections there.

By the way, next week is Tisha B’Av, a day on the Hebrew calendar that marks the destruction of both Temples among other major tragedies for the Jewish people.  I guess we’ll have to see what happens next Tuesday.

Breakdown of what’s happening on the Temple Mount – op-ed.

Old City of Jerusalem listed under Jerusalem – not under any country – and noted that it is nominated by Jordan.

Yay for plurality! Hoorah for equality!

This is widely seen by the Jewish community outside of Israel and many inside Israel as a good thing because it feels more inclusive and is more open to the non-Orthodox communities who don’t feel connected to the Orthodox vibe of the Western Wall open air plaza. Now they have their own place. It’s close to the plaza, but at the same time they are not in each other’s faces about how they choose to commune with God. 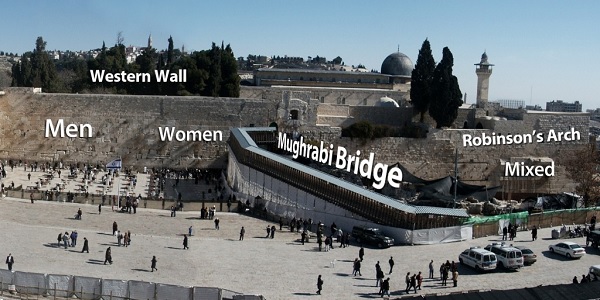 First of all, this space has existed for quite a while. It’s not new. What is new is the entity that would administer it and the fact that it would be expanded. Until now, it was just a tacitly agreed upon space for Reform, Conservative, and various other streams of Judaism to gather and pray as they wish (mostly by not separating the genders).

Women of the Wall have been advocating for plurality and equality and part of the organization agreed to the mixed-gender space. The members who don’t agree feel that they should be allowed to pray in the women’s section as they wish – they don’t really want a mixed gender space. The problem they’ve been facing is that the Orthodox do not agree that a woman can be allowed to put on tefillin, wear a prayer shawl, or read from the Torah. They have fought this battle in court (and won), but have been harassed by both men and women at the wall and arrested for disturbing the peace for gathering at the Western Wall to pray.

Then there are the archaeologists who say that the new construction would damage the archaeological evidence that exists there – specifically, evidence of stones from the wall that fell during the Roman conquest.

Like any other decision, it’s complicated and there are naturally positives and negatives. Decisions get made with compromise and everyone has to give a little.

But there’s more. And this is why this article is called “the simmering pot.”

The violence (aka the knife intifada) that began last year is based on a perception that Israel is trying to change the status quo on the Temple Mount. In October 2015, UNESCO voted on a draft proposal that tried to declare the “Western Wall an ‘integral part’ of the Al Aqsa mosque compound.” That was eventually dropped, but in November Mahmoud Abbas insisted that Israel was trying to change the status quo on the Temple Mount by protecting “settlers” who were “violating” Muslim and Christian holy sites. (The “violation” being prayer. Jews are not allowed to pray on the Temple Mount and are arrested by Israeli police for doing so.) And now, with the vote on the mixed gender prayer site, the Waqf (the Jordanian authority administering the Al Haram al Sharif [Temple Mount]) has declared this vote Israel’s newest intention to change the status quo by “Judaicizing the holy site.” The “holy site” in this case being the Western Wall.

Let’s look back to September 2000. Ariel Sharon visited the Temple Mount to show that all Israelis have a right to visit the site. And then we had the Second Intifada. (Yes, that is a wild oversimplification.)

A vote for a mixed gender prayer site seems like a small thing. But this is Israel. The Western Wall supports the Temple Mount compound where the Al Aqsa Mosque and the Dome of the Rock stand. Context and interpretation are everything. And so the pot simmers on.