In spite of what you see on the news, I still feel quite safe in Jerusalem. However, I’m not crazy and I won’t be reporting live from the Temple Mount.

Unless you’ve been too wrapped up in the drama at the White House, you might have noticed that the Temple Mount has been in the news lately.  This post won’t be a point by point explanation of that, nor will I get into all the vitriol.  The salient facts are:

I’d like to jump out of the 24-hour news cycle and try to look at the big picture.  I’ve written about the UNESCO decisions before (here and here) and I continue to be troubled. 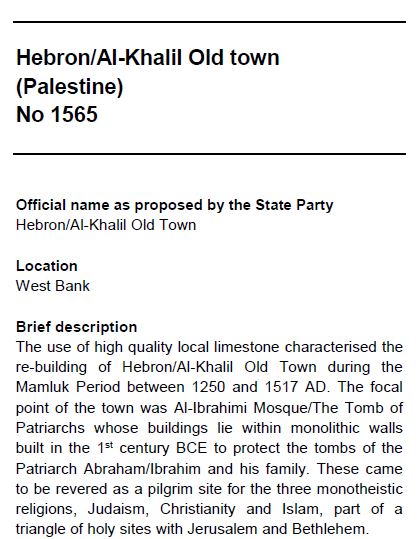 Jerusalem and its Walls are a UNESCO World Heritage Site in Danger.  In skimming the conservation report for 2017 prepared by Jordan and Palestine for UNESCO, Israel is accused of breaking the “status quo” all the time.  So two weeks ago, putting in security measures violated the status quo, which is a strict constructionist view of how to maintain the status quo.  The security measures weren’t there in 1967, thus they should not be there now.  Security is trumped by the politics of the status quo.

Screen capture from the conservation report

Here’s my final point about the status quo and why we have to be so much more diligent about paying attention to UNESCO.  Buried in a footnote on page 39 of the conservation report is this:

Under the terms of the Status Quo on holy sites, a decree fixed the Ottoman Sultan in 1757 and codified in more detail by a British government Commission in 1922, 1929 and 1933 the Wall is a Muslim Waqf property and the Waqf owns the Buraq Wall and the Buraq Plaza in front of the wall. In these decrees, Jews have the right to stand on the pavement in front of it and pray. (Emphasis added.)

This is what is considered the “status quo.”

So according to documents accepted by UNESCO – the United Nations Educational, Scientific, and Cultural Organization – Jerusalem is not in Israel, the Cave of the Patriarchs is an excellent example of first century CE architecture, and the Western Wall is the western wall of the compound of the Haram al Sharif. Oh, and Jews and Christians might have some connections there.

By the way, next week is Tisha B’Av, a day on the Hebrew calendar that marks the destruction of both Temples among other major tragedies for the Jewish people.  I guess we’ll have to see what happens next Tuesday.

Breakdown of what’s happening on the Temple Mount – op-ed.

Old City of Jerusalem listed under Jerusalem – not under any country – and noted that it is nominated by Jordan.