On Monday a bus blew up.

I heard a lot of sirens all of a sudden just before 6pm.  At first I thought it was a VIP and his entourage.  But then there were more.  And more.

Facebook.  A friend’s comment.  “Anyone know what happened on Derech Hevron?” And then the answers started flooding in.  It wasn’t Derech Hevron.  A bus.  Was it terror?  Wait.  The police don’t want to say that yet.  Definitely bus on fire.  Second bus also on fire.  Then the evidence pointed to terror.

Between 6pm and 7pm I had to make a decision.  My Tai Chi class is in the same neighborhood as the bus bombing.  Should I take a bus as usual?  Class wasn’t canceled (of course), so I decided to walk.  I walked in part because I could use the additional exercise.  The chance of another bus attack was pretty small, but it’s been so long since a bus attack that I just didn’t want to get on a bus.

It took 45 minutes and I was pretty pleased with myself.

On the way back, another choice.  As I was passing the bus stop, the bus came.  I could have gotten on.  There were plenty of people taking the bus right then.  But I chose to walk.

I was happy with the accomplishment of walking to and from class.  It was a good long walk and something that I had considered doing before.  But I’m bothered by the fact that the thing that pushed me to do it was a bus blowing up.

Since this is Israel, “normal” right now means high alert.  Over major holidays in Israel there is a much more visible presence of security personnel and starting today and for the next 48 hours the West Bank and Gaza Strip are closed off.

I am sure that upon hearing the words “West Bank closed off” there are those who would cry “oppressive occupation” and excuse all violence against civilians as “legitimate protest.”  I disagree.  Besides nothing being “legitimate” about blowing up a bus filled with civilians, as a citizen of Israel, I expect my government and our armed forces to protect civilians.  I expect to feel secure as I walk or take a bus in my streets.  And when I look at images like this, I’m glad that security personnel are doing everything in their power to keep us safe. 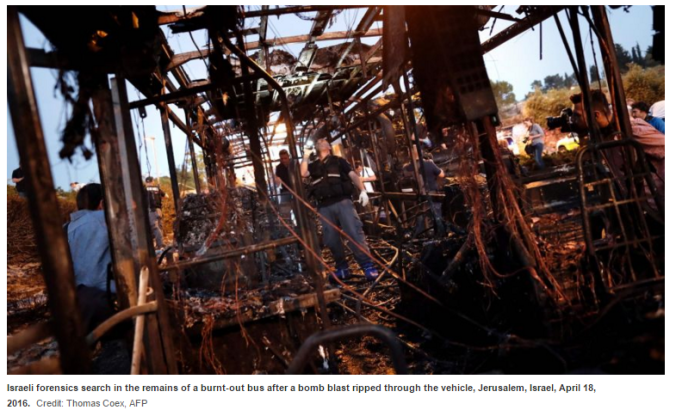 Originally, I had plans to write a nice Friday email about my first Passover in Israel, but this week provided many other potential topics – this bus bombing, a follow-up on Western Wall/Temple Mount issues, and Prince, another icon from my childhood, passed away.  Well, it will still be Passover next Friday and I may yet write about these other things too.

Wishing everyone a peaceful Passover!