Purim is not my holiday. I’m not a fan of dressing up, partying all night, or drinking until “you can’t tell the difference between Mordechai and Haman.” No matter how I feel about it, Israel goes bananas over Purim. Think Halloween on steroids.

In recent years, I’ve seen a more philosophical interpretation of Purim. Some women talk about the strength of women in the story. The Jews are saved by Esther because she was in the right place at the right time. Some bring up Vashti who said “no” to the king (creating the opportunity for Esther) and her courage to disobey the patriarchy.

Another philosophical conversation turns around the fact that God is never mentioned in the story. Things coincidentally happen, but the name of God is never uttered. Is God behind the scenes or is the story a series of convenient coincidences? Well, you can answer that for yourself.

This year Purim and Dad’s secular yahrzeit fell on the same day. I’d like to think that Dad is still with us in some way and is part of our stories. We may not talk about him every day, but as long as he is remembered, he still exists for us.

I watch a lot of Korean dramas and Koreans mark the anniversary of the death of a loved one with a ceremony that includes the person’s favorite foods. I like that. Dad didn’t eat a lot and nothing really stands out as his favorite (Steak? Vanilla wafers? Greasy spoon diner food?) Dad liked to play poker, so in his memory, here’s a Royal Flush. 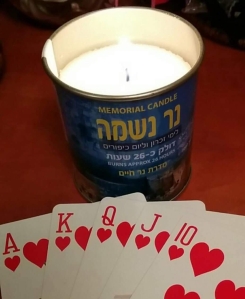 The early chapters of our story (I’m the kid)